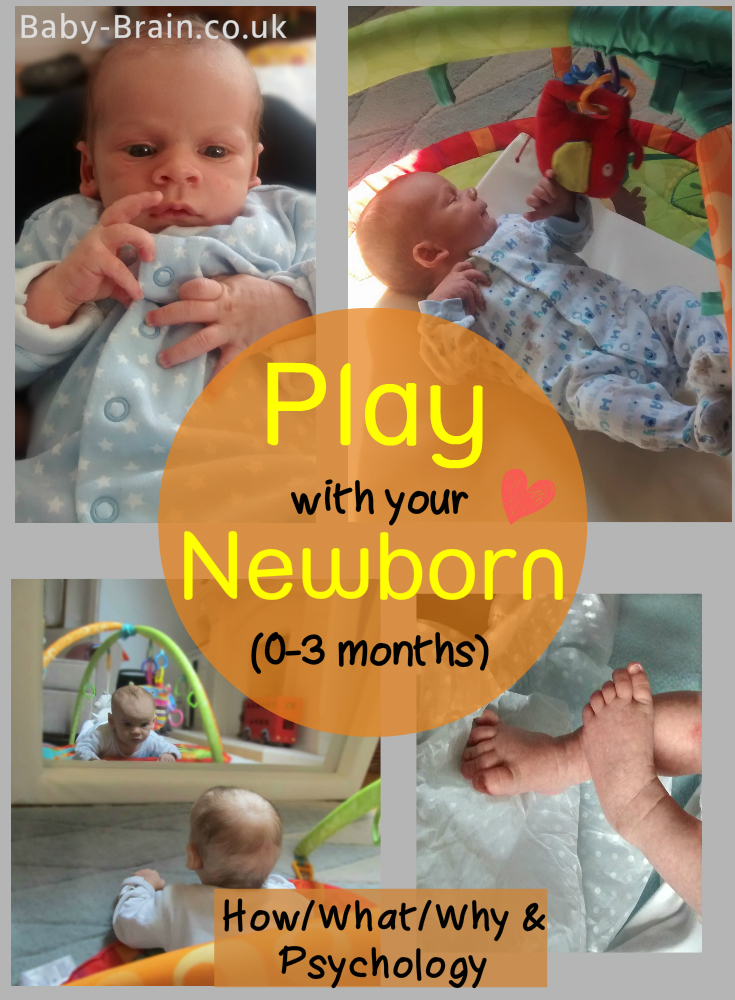 As I approach the 5th month with the new baby (already!) I was looking back and thinking of the ways that we “played”. There’s a lot of time in the day so how can you play with baby and what can you do all day long? Well, apart from nappy changes, sleeps, screams, baths and other practical “stuff”, here’s some ways we played together and some of the psychology/research behind activity ideas:

Face to Face time is a GREAT way to play. This means simply being face to face with baby and having a chat. You can talk about anything; something that you did that day or just make certain sounds with some over the top mouth-moving to show how you’re making it, like B-B-B-B-B-B, OOoooo.

Talking is important but it’s a case of Quality, not Quantity

Talking in “parentese” – that baby talk that we do, characterised by higher pitch, slowed down and exaggerated intonation (6) – might irritate some but apparently it has it’s benefits; slowing speech down and exaggerating sounds, also introducing that “sing song” element to the voice is something babies like. It works well with very young babies according to this article who report that prevalence of baby talk with children (in one to one conversations rather than in groups) was linked to better language development,

The more parents exaggerated vowels – for example “How are youuuuu?” – and raised the pitch of their voices, the more the 1-year olds babbled, which is a forerunner of word production.

When the babies were 2 years old, parents filled out a questionnaire measuring how many words their children knew. Infants who had heard more baby talk knew more words

Again, communication is paramount so singing counts too. Apparently, from day one babies have an ability (innate) to discriminate rhythmic patterns. See this interesting article from Psychology Today for more but in sum, you can start in utero – around 25 weeks of pregnancy the baby starts to process auditory signals – which is why newborns may prefer their mother’s voice, because it is quite familiar to them!

Reading from birth is a great thing to practice, and has benefits. See my reading page for more in-depth information on the psychology of reading with babies and small children. In brief, baby will recognise their mother’s voice from the womb (1) and hearing it from day one may be familiar and comforting to them, reassuring them of your presence (2).

When we read we usually read with different expression and voices than when we talk and books/reading materials contain different vocabularies, words, expressions than what we might use in every day talk around our children. This is useful because it exposes the child to more varied language and sounds.

Reading to babies from the early months has been found (3) to be related to increased reading with babies at 8 months old (creating a reading habit), which in turn, related to language abilities at 12 and 16 months, particularly with expressive language (being able to put thoughts into words and sentences).

Interaction when reading has also been highlighted as an important element in relation to language development (4) with older babies (12 months). 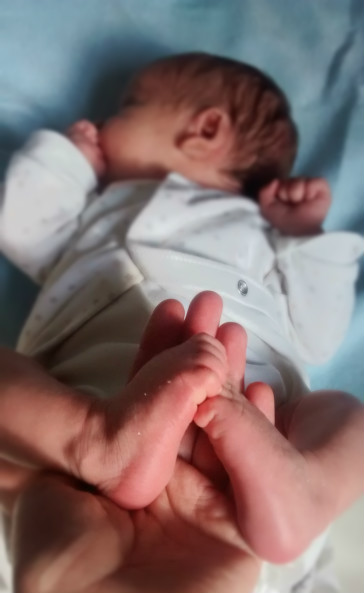 Touching hands, touching feet – we did a lot of this in month one, mainly because his little feet were so cute. The baby and I are due to take part in a research study soon at a Baby Lab about whether infants in the early months can distinguish between a social touch and other touch. This will involve monitoring activity and touching baby’s arm with a toothbrush and then touching by hand.

Skin to skin is recommended and touch is going to be important! Research has reported increased touch to facilitate growth and development (cited in 5). Research on benefits of touch with premature babies has also influenced procedures in some hospitals such as use of “kangaroo care” where the baby receives skin to skin contact being held upright against the bare chest of the carrier (5). There is a huge wealth of literature out there about importance of touch and skin to skin with babies and infants which I encourage you to read further if this is an area of interest to you.

We also did lots of sensory play such as touching soft toys, a range of textured material and letting him touch/kick his little feet on some crunchy sounding tissue paper. 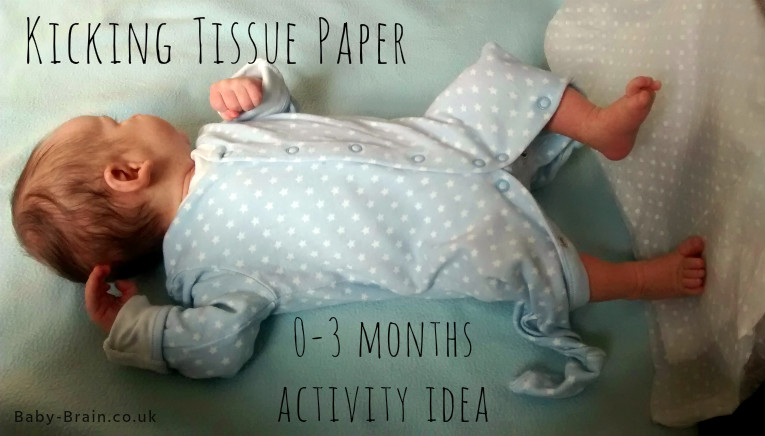 We spent a lot of time sticking our tongues out at each other! Given baby’s limited communication channels, this was something he was able to do and I sat there and “Mirrored” him, i.e. copying what he was doing and sticking my tongue out in response to him. This then turned into a kind of “conversation” where we would take it it turns. I then threw a few more facial expressions in and tongue clicks which seemed to interest him. This early study (6) writes that babies between 12-21 days old are able to imitate facial gestures, so you can try it from the first few weeks! Also loving the pictures in that article of the baby imitating “mouth opening” and especially the “lip protrusion”.

In terms of visual aspects and development, the visual system is not yet fully developed at birth (a). Baby has difficulty distinguishing between similar colours such as orange and red and so prefer high contrast colours such as black against white. We used several “high contrast” images and resources such as a black and white book and flash cards. 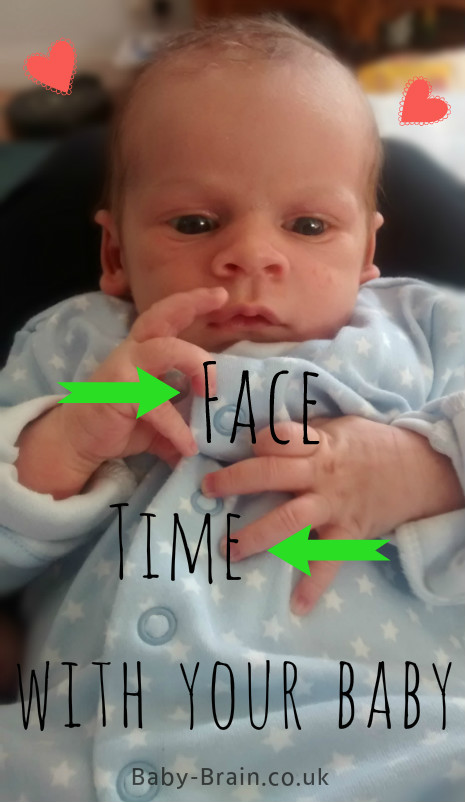 Babies love looking at faces; even in the days after birth a baby will prefer to look at images of a face compared to other images. YOU are their favourite play thing and baby will be very interested in staring at you whilst you sing/talk/coocheecoo at them.

YOU are your baby’s favourite play thing!

Here’s a good video about “marked mirroring” with your baby. The page has described it nicely so I’ll just quote here:

Facial expressions that help a baby to know his feelings are understood are known as ‘mirroring’. Mirroring is said to be ‘marked’ when the parent mirrors the emotion then quickly ‘marks’ the interaction with a reassuring expression. Mirroring shows the baby that he is understood and reflects the feeling he is experiencing.

The’marking’ helps the baby know the feeling belongs to him and that the parent understands but is not overwhelmed and is therefore able to help him or her to manage such feelings. 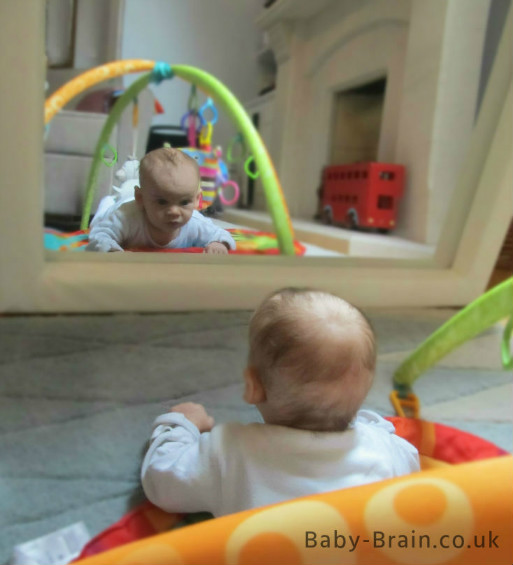 Who’s looking at you, kid?

Tummy Time, play in the mirror and play gym were some fun and easy activities we tried at home. See links for more information on these activities. Play gyms for example have some great cognitive, visual perception, grasping and reaching skills, gross motor skills, self-awareness and sensory stimulation benefits as summarized in this nice article here by Mama OT. Personally, I could really see the baby developing in terms of gross motor skills, coordination and crossing his midline to reach out and grasp at toys.

Getting out and about

At first I remember it seeming very daunting and difficult on a practical level to get out of the house. Add two kids to the mix and there seemed like even more obstacles and things “to do” before we could get out the front door. However, there are many benefits and aspects for parent and child including social and mental health elements. Here’s a page about choosing activities and benefits of them for maternal mental health.

Lastly: Enjoy this time with baby!