Tactile and Visual Entertainment Tubes – for babies and infants 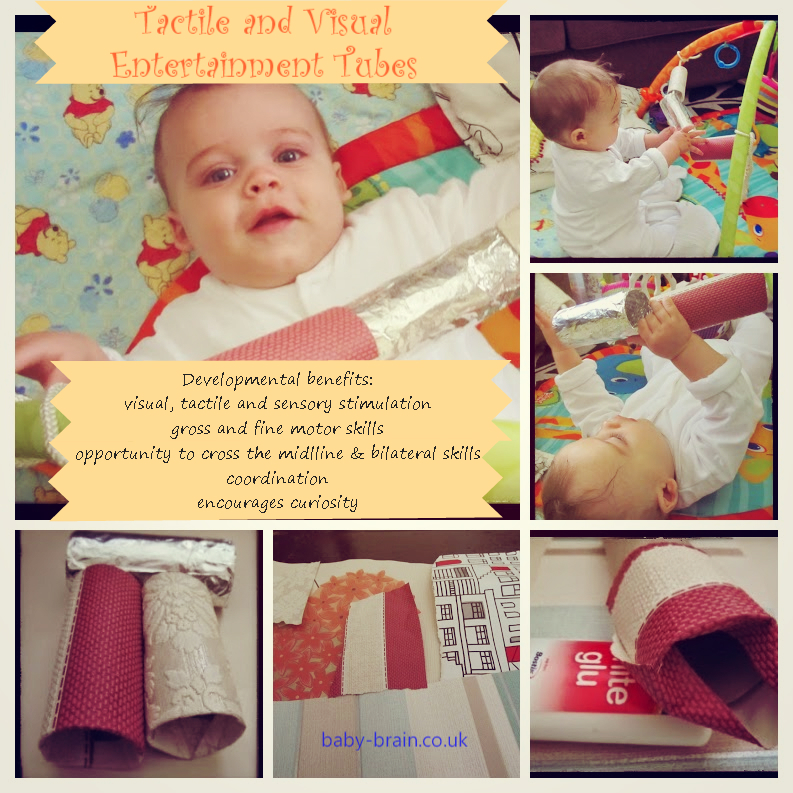 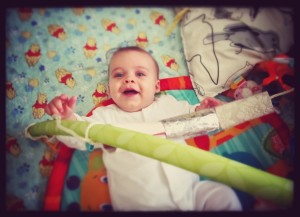 The original activity is to make a baby play station using toilet paper rolls, wrapping different fabric/materials around each roll, attaching rolls to a curtain rod and then watching them roll as baby plays/spins them around. I decided to attach them to some string and attach the string to the play gym for the Little Lovely to play with.

Here’s the steps I took to make it: 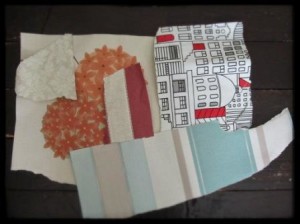 Step 1: I found some materials to use that were visually stimulating and/or tactile . I used old wallpaper scraps that were bumpy and had a nice texture, and some shiny material. 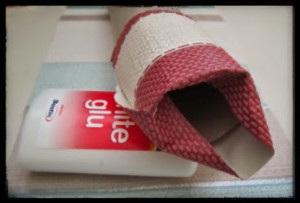 Step 2: I carefully cut to size and glued the paper/material scraps onto toilet paper rolls, folding any excess fabric or paper into the inside of the roll. 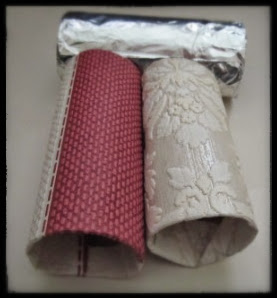 Step 4: I threaded the tactile and sensory rolls onto thick string but you could attach to a rod as in the original idea, or something safe for your infant to play with. I then attached mine to hang between two poles of the play gym.

….and voilà! Here are some pictures of LL enjoying his new toy 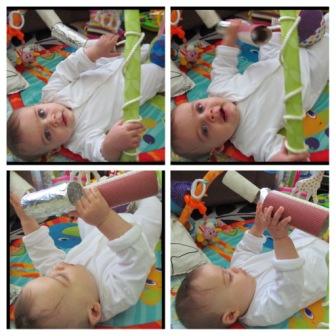 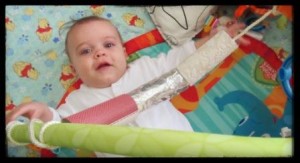 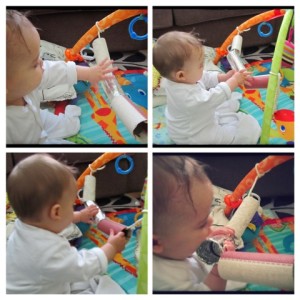 Thinking more about him sleeping through the night, I was thinking about schedules. 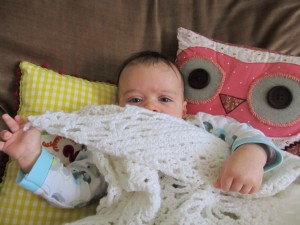 I’m attempting a better day time schedule (maybe this will positively impact on night time?). So far we don’t really have one. This is terrible I know because in my work I am all about behavioural interventions and working with people to log their activities and create meaningful activities and some structure to their day. In my depression related work with adults this can be fundamental and people often see an increase in mood with an increase in meaningful activities, good self care and better sleep at night. At the moment with LL we just do what I think he wants to do when he wants to do it. It’s probably an extension of the feeding and sleeping on demand that was present from birth. But now I’m wondering if the lack of structure and routine is just not very containing or predictable for him, or for me. Naps and feeds then get thrown off and can occur at any time. He doesn’t know what to expect and neither do I.

In another attempt to break the eat-sleep association, I’m trying to not feed before naps and instead to do a feed, wake (inc. play/activities/baby classes etc) and then sleep kind of structure. I just need to work out how long each cycle should be. Some say 3, some say 4 hours at this stage (e.g. Baby Whisperer; LL is 4.5 months). The eat-sleep association just kind of arose because it was difficult to get LL off to sleep initially and that seemed to work. Rocking him while singing row your boat also seemed to work for day time naps and although I knew that in the long term these methods might not be great because he was reliant on my rocking or feeding, I didn’t mind because at least he was getting some sleep and not cyring about being tired. I thought – well I’ll just have to make changes to any habits later on because at this point (first few weeks/months) any sleep is better than no sleep, and I don’t care how we achieve it! And the longer the sleep, the better.

Ok so plan for next few weeks is to start more of a day time routine! Consistency and predictability is really important.

Two for the price of one!

There’s two teeth there not just one! 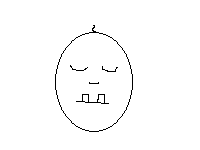 The Little Lovely’s daddy noticed another one coming in right next to the first. Poor boy. I wonder if it’s confusing for him to have these things suddenly appear and hurt in his mouth. No calpol, granuals or teething gel today. I did get another teether though in case it helps him. He doesn’t seem to be too interested in them though and prefers to chew on his or my hand instead.

Although he’s been drooly for a while, teething symptoms apparently occur significantly more frequently in the days before, during and after the tooth emergence (an 8-day teething period or “window” – says a recentish study (1)). Might explain some irritability and poor sleep we all had recently.  The study didn’t find high fever to be associated with teething, something that I was looking out for and relying on to confirm teething! Although a mild rise in temperature was associated.  Some infants had no symptoms, but they do helpfully highlight “mild symptoms” found to be temporally associated with teething including increased biting, drooling, gum-rubbing, sucking, irritability, wakefulness, ear-rubbing and facial rash. Although, no particular cluster of symptoms were found to reliably predict the imminent emergence of a tooth — so poot if I was looking for a predictive formula. oh well, only one study.

Note though symptoms are not necessarily caused by teething (they are only associated) – for example, this study (2) writes that  “during this same time period of an infant’s life, passive immunity due to maternal antibodies wanes and exposure to a wide variety of childhood illnesses occurs. Due to this temporal relationship, teething often is blamed for symptoms such as changes in sleep and eating patterns, rhinorrhea, drooling, rash, fussiness, and diarrhea.”

The Little Lovely (LL- as pictured) is teething!

He’s been drooly for a while now, and could get quite irritated, so we suspected It could be teething but then we also weren’t sure as he can get slobbery and annoyed at other times as well. He gets particularly drooly before his bedtime feed; I started singing the song “truly scrumptious” but replacing “truly” with “drooly”, until the song got stuck in our heads and LL’s daddy banned the song. In fact I’m singing the song now. I just googled it and found this website, so I’m apparently not the only one making that association. Unfortunately for me the site is American, so I can’t buy anything there. Too bad, this one looks quite nice

Anyway, he has one little toothy peg coming in on the bottom in the middle. He’s going to look like a ogre with one little tooth sticking out, but it appears that he is “normal” in terms of this tooth coming in first according to info on order of tooth appearance.

I was sitting next to a nanny at a baby class, and she told me that when the front and bottom teeth come in the baby looks like a rabbit – nice! She said she has nannied 7 babies so far and has her own children, so I suppose she should know.

I was recommended those chamomile teething granules so we used one today and a bit of teething gel. LL didn’t seem at all concerned that we were putting strange stuff in his mouth. I don’t know if they work yet for him, it’s only been used the once.

I was a bit upset when he first started drooling and I suspected teething. And now he actually has one coming through it means he’s not a baby anymore and and a reminder he won’t need milk forever. He’s on the way to chewing and munching through his own foods. He’s only 4.5 months old, it all seems a bit early. My little baby is no longer so little.

I need to find a gum massager and other teething tools. We have some teethers that I bought a few weeks ago, but he is not very interested in chewing on them. I got a chewable toothbrush but I’ve seen some that you can put on your finger for babies to chew. This might be a better idea because LL is a big fan of hand and finger chewing, both his own and anyone else’s.