A little piece about baby and infant visual development:

What can babies see in the first few months of life?

The visual system is not fully developed at birth (1), and sight develops gradually. Baby has difficulty distinguishing between similar colours such as orange and red and so prefer high contrast colours such as black and white.

In fact, some research shows that infants might prefer blue and purple colours (2). This article outlines that:

Babies do have color preferences, and these preferences seem to be mostly determined by hue. Blues and purples are babies’ favorites, while greens, yellows, and reds are liked less…

…Does this mean expectant parents should run off to buy purple and blue toys?… In the end, I doubt it would make that much difference in a baby’s life. The first few months of infancy are over quite quickly, and are spent mostly sleeping…but it’s still interesting to see how babies’ visual systems develop, and how at just 3 months of age they do appear perceive colors in a way that is analogous to adults.”

Here’s some high contrast images that can be printed out: 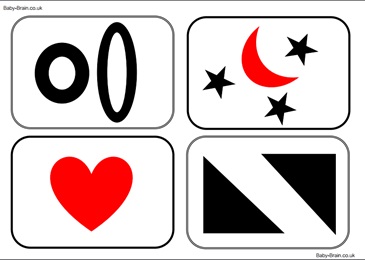 What do babies prefer to look at?

What about other stuff like depth perception? Are babies born with it?

No one wants their child to go crawling off the sofa, table, any other deep drop. There’s a “classic” psychological study called the “visual cliff” (6) (Gibson and Walk, 1960; read the article here) that looked at depth perception. The psychologists predicted that depth perception would be something we are born with, rather than something we learn as children. They therefore developed an experiment to test this prediction with babies aged 6-14 months.

The study set up a “visual cliff”, which used a board laid over a heavy glass sheet, raised from the floor, with some patterned fabric under it. The fabric was immediately beneath the glass but then it looks as though it “drops off” on one half of the glass because the fabric is then laid down on the floor below (rather than directly beneath the glass). The glass still covers the space though, so it creates the visual effect of a drop off, or “cliff”, but the glass is still sturdy and continues across the drop so that any crawling baby will not actually fall, but it can see that there is a drop below.

The parent then stands on the “cliff side” and calls for the baby to crawl over to them from the “shallow side”. Many of the children found it difficult to crawl over to the parent because of the perceived drop. Only 3 of 27 “crept off the brink” onto the drop, many crawled away from the parent as they called to the baby from the cliff side, and some cried because they couldn’t get to the parent without crossing an apparent drop (this is an old study when ethics committees were maybe slightly differently, ok, so maybe not so nice to read about the kids crying)

Often they would peer down through the glass on the deep side and then back away. Others would pat the glass with their hands, yet despite this tactual assurance of solidity would refuse to cross. (pg 64)

The study concludes that:

Most human infants can discriminate depth as soon as they can crawl.

and… The behavior of the children in this situation gave clear evidence of their dependence on vision. (pg 64)

Still, a good idea to buy those stair gates and other relevant protection though, yeah?!